Another JuicyLesson from Canadian Jerry (CJ)

Let’s face it. Trump is a liar who wouldn’t know the truth if he tripped over it. So when John Bolton, a fascist himself by the way, writes that Trump told him that he was withholding military assistance cash from Ukraine, this aid having been already appropriated and approved by Congress in a bipartisan manner, no one can believe Trump’s denial. Rick Santorum on CNN just said that the president doesn’t always follow through with what he says then the implication is that it doesn’t mean that he actually carried through.
Really? If that’s all you got Mr. Santorum, just shuddup.

Another thing. Bernie Sanders is the man, the best candidate by far but a veritable threat to the establishment including to the main stream corporate media. Thus we should take what we hear on CNN, NBC, CBS and not to forget about FOX with the proverbial grain of salt. This guy on CNN has just pathetically tried to spin Sanders’ excellent NYT poll results with those publicly put out there by Manmouth U. poll which shows Biden in the lead. He also did an analysis of polling as to performances in caucuses which shows Sanders in front by eight points, vs. performance in primaries which IMHO is irrelevant for the moment and seems like a way to nullify, as much as possible, in the public psyche, Sanders’ expected win in the Iowa caucuses, as of this writing, only four days away. 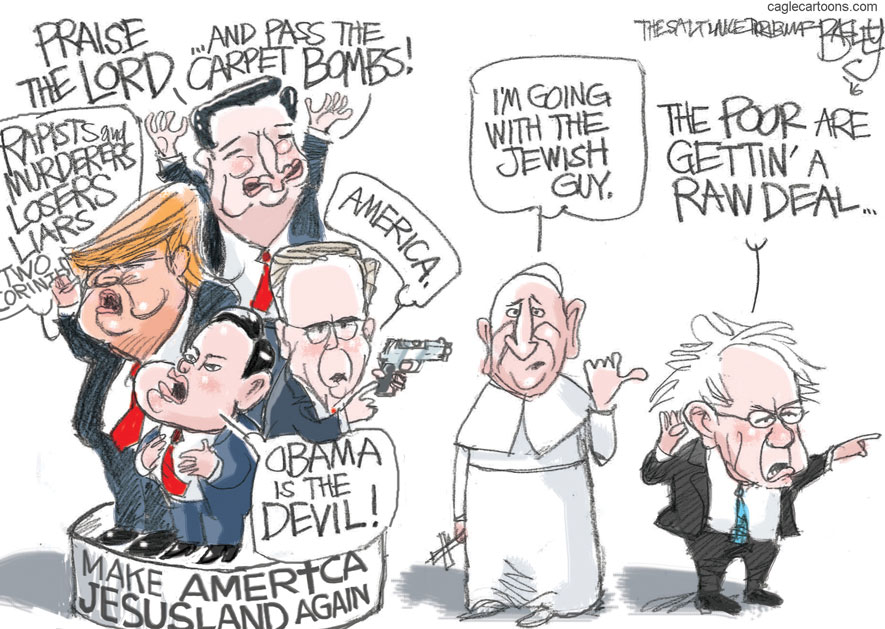 Right, Hillary. He is LOVED.

Just watching some more of the goings on transpiring in the Senate; Senators are now asking questions of the president’s counsel and the Democratic House Managers headed by Adam Schiff. I was immediately struck by the following thought while watching Schiff straightforwardly refuting the concerns expressed by Republicans while seeing president’s counsel falling all over themselves trying to respond to concerns raised by Democrats in the Senate: everyone in that body knows the truth – Trump withheld aid to Ukraine until President Zelensky announced that he intended to investigate the Bidens, an obvious quid pro quo, “this for that”. (The above-mentioned announcement never was made, by the way.) It is much easier for Schiff to present the Democrat side of things because the truth supports his efforts.

On the other hand, the counsel for the president is just floundering, lying, covering up and double-talking simply in order to muddy the waters because that’s all they can do in this context. They know Trump is guilty and that he should be subject to removal but they can never intimate that.

Mick Mulvaney’s now infamous “get over it” remark, in which he was referencing the above-mentioned quid pro quo has been handled in the following manner by the president’s counsel in response to a question: The lawyer simply read Mulvaney’s attempt to walk back his remark by arguing that it was the media which perverted the meaning of what he had so obviously said. He made this attempt to backtrack in the immediate aftermath of the original “get over it” remark. More bullshit and laughable.

Mick “Get over it” Mulvaney aka Mick the Prick.

Alan Dershowitz’s argument, however, so far, takes the cake. Dershowitz, one of the president’s men, who seems to be impressed by his own intelligence, stated that Trump cannot be impeached and removed from office using logic which I find hard to take. According to Dershowitz, since any public servant (that he had met) believe(d) that getting elected is/was in the public interest and therefore that there could never be a quid pro quo since, when Trump, for example, in the now infamous phone call with Zelensky, asked the Ukrainian president to “do us a favour, though”, he was actually working in the public interest since his action, in his mind, was aimed at his re-election. What a bunch of crap.

Above: Dershowitz answers a question during the Senate trial of Donald Trump. 29-01-2020

To quote my good friend and Bialik High School alumnus Glen Rotchin:
“Jaw dropping moment in today’s proceedings, provided by the inimitable Alan Dershowitz. He argued talmudically that a president can invite, encourage, coerce foreign interference in an election and it would not be a corrupt abuse of his office because he may believe that his reelection as president is in the national interest and not his personal interest.”

What low grade shit show this whole thing is turning out to be.